According to 30+ lists (see bottom of page for links) aggregated by Dave’s Music Database, these are the best albums of 2013. Be sure to also check out the DMDB post of the top 50 songs of 2013.


21. The Knife Shaking the Habitual
22. Chvrches The Bones of What You Believe
23. Laura Marling Once I Was an Eagle
24. Waxahatchee Cerulean Salt
25. Run the Jewels (El-P with Killer Mike) Run the Jewels
26. Jon Hopkins Immunity
27. Neko Case The Worst Things Get the Harder I Fight. The Harder I Fight, the More I Love You.
28. James Blake Overgrown
29. Danny Brown Old
30. Rhye Woman


Resources and Related Links:
Posted by Dave Whitaker at 3:41 PM No comments: Q is a British music magazine which has published numerous best-of lists over the years. Based on those lists (sources at bottom of page) and year-end lists, here are the best songs from each year.

Q Magazine Lists:
Posted by Dave Whitaker at 7:55 AM No comments:

Email ThisBlogThis!Share to TwitterShare to FacebookShare to Pinterest
Labels: 1953, 2013, Adele, Arctic Monkeys, Do I Wanna Know, Fire, Ill Manors, Kasabian, Plan B, Q magazine, Someone Like You, song of the year, songs of the year, Stay Too Long

With more than 40 best-of song lists aggregated (see links at bottom of page), here are the songs which rank as the best 2013 has to offer. Interestingly, the song list is very slanted toward the big pop hits of the year while the album list (see it here) is very geared toward less-commercial, independent releases. Admittedly, the use of multiple Billboard lists below has a great deal to do with that, but I also believe song lists tend to lean more toward the commercial while album lists incorporate the more obscure. Anyway, here’s the list:

Resources and Related Links:
Posted by Dave Whitaker at 6:39 PM No comments:

The Rock and Roll Hall of Fame Class of 2014

The Rock and Roll Hall of Fame has announced its inductees for the 2014 class. Artists are eligible for the Hall 25 years after the release of their first single or album. The newest slate will be inducted on April 10, 2014, at Brooklyn’s Barclays Center in New York City. HBO will air the event in May. Here are the inductees:

Peter Gabriel: He was inducted into the Hall in 2010 as a member of Genesis. As a solo artist since the ‘70s, he has explored electronic and world music. His video for #1 hit “Sledgehammer” ranks as one of the best videos of all time.

Daryl Hall & John Oates: This blue-eyed soul duo has the most successful Billboard chart run of any twosome in music history. They started in Philadelphia in the early ‘70s, but hit their peak in the early ‘80s with #1 hits “Kiss on My List,” “Private Eyes,” “I Can’t Go for That (No Can Do),” and “Maneater.” They’ve sold more than 13 million albums.

Kiss: Miracles never cease. Members of the Hall induction committee swore they’d never let the mother of all hair bands in while fans have raised a stink in the 15 years the group have been eligible and been passed up. Critics have never liked the band, but the KISS Army represents one of the most loyal fan bases in the history of rock. They’ve sold over 20 million albums on the strength of rock classics like “Rock and Roll All Nite” and power ballads like “Beth.” Nirvana: The group most associated with grunge enters the Hall in its first year of eligibility, 25 years after the release of the single “Love Buzz” in 1988. Three years later, they would take over the world with “Smells Like Teen Spirit” and parent album Nevermind. The group’s heyday was short-lived when lead singer Kurt Cobain committed suicide months after the release of the 1994 follow-up, In Utero, but their influence had been cemented.

Linda Ronstadt: She emerged from the folk scene in Los Angeles in the 1960s and became one of pop music’s biggest successes in the 1970s with a blend of country and rock, selling more than 30 million albums and winning a slew of Grammy awards. She regularly covered classics from rock’s pioneers – among them were the Everly Brothers’ “When Will I Be Loved,” Buddy Holly’s “That’ll Be the Day,” and Roy Orbison’s “Blue Bayou.”

Cat Stevens: This British folk singer/songwriter made a name for himself in the 1970s with hits like “Wild World” and “Peace Train.” He converted to Islam in 1977, changed his name to Yusuf Islam, and stepped out of the spotlight for more than two decades. He has sold more than 15 million albums.

E Street Band: Bruce Springsteen was inducted into the Hall in 1999. Now his backing band since 1973 is inducted with the Award for Musical Excellence.

Brian Epstein: He receives the Ahmet Ertegun Award (for non-performers) for his work as the manager of the Beatles. He signed them and then sheparded them until his death in 1967. Paul McCartney said, “If anyone was the fifth Beatle it was Brian.” 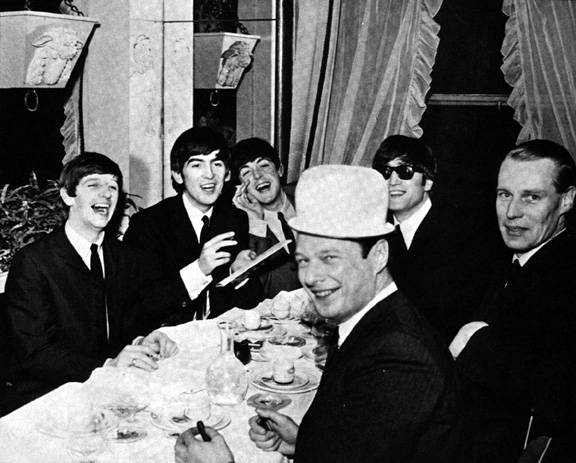 Andrew Loog Oldham: He also receives the Ahmet Ertegun Award (for non-performers) – and also for producing one of rock music’s most acclaimed bands – The Rolling Stones. He was with them for their formative years, helping to push Mick Jagger and Keith Richards to write original material. Oldham (second from left) with the Rolling Stones, image from zombiesenelghetto.tumblr.com

Resources and Related Links:
Posted by Dave Whitaker at 11:34 PM No comments:

The nominations for the 2014 Grammys were announced on Friday, December 6, 2013. Below are the nominees for the major awards. The full listing is available here. The 56th Grammy Awards will be held January 26, 2014. Album of the Year:

Record of the Year:

Song of the Year:

Resources and Related Links:
Posted by Dave Whitaker at 11:59 PM No comments:

In 1973, the Recording Academy (more widely known as the Grammys) established a Hall of Fame to, as it says on their website, “honor recordings of lasting qualitative or historical significance that are at least 25 years old.” 40 years later, nearly 1000 albums and songs have been inducted (see the full list here). Here are this year’s inductees: Albums:

The Joshua Tree and After the Gold Rush ranked in the DMDB’s Top 100 Albums of All Time already. All Things Must Pass, Cosmo’s Factory, Mary Poppins, Woodstock, and Chicago Transit Authority all ranked in the top 1000.

Six of the songs were already listed in the DMDB’s Top 1000 of All-Time: “Honky Tonk Women,” “Walk This Way,” “Rapper’s Delight,” “Raindrops Keep Falling on My Head,” “Fortunate Son,” and “Under the Boardwalk.” “Honky Tonk Women” also ranks as one of the Top 100 Songs of the Rock Era.

Resources and Related Links:
Posted by Dave Whitaker at 11:59 PM No comments: