Posted by Dave Whitaker at 2:33 AM No comments: Links to this post

Here are the 2013 winners from the American Music Awards:

Resources and Related Links:
Posted by Dave Whitaker at 11:59 PM No comments: Links to this post 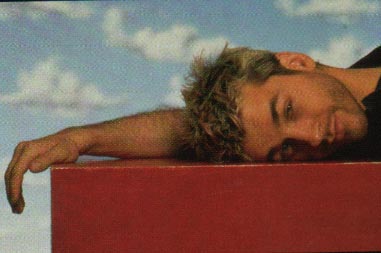 While my posts typically focus on songs, albums, and events which significantly impacted the music world, this entry focuses on a little-known performer who ranks as one of my favorite singers. “Sometimes genius comes and goes without much notice or fanfare. Such is the case with the late Kevin Gilbert,” P “a musical prodigy” JS who “colleagues invariably called…‘the most talented musician I ever met.’” JS He “spent several years on the edge of stardom [but] could never capitalize on his talents.” DE He “might be the most talented American musician to be involved with progressive rock, with the possible exception of Frank Zappa. Although all of his work contains a very strong pop element, there’s usually a lot of prog underneath it.” DN

NRG/Giraffe (1984-89): In the mid-‘80s, while still in high school, Gilbert released his first album, No Reasons Given, with the group NRG. That album is free to download at KevinGilbert.com. In the late ‘80s, Gilbert spent a year as a film student at UCLA and took a gig as Eddie Money’s touring keyboardist before launching the group Giraffe. Between the release of their two albums, the band entered and won a national unsigned-bands competition.


Giraffe “Because of You”

Toy Matinee (1989-91): In the competition, Gilbert caught the attention of Patrick Leonard, a producer who had worked with Madonna and others. Leonard suggested a collaboration and the group Toy Matinee was born. “The lone Toy Matinee album was released in 1990 but effectively shelved by the record company.” WK “Gilbert assembled a new backing band [including an unknown Sheryl Crow as his keyboardist] to promote the album, eventually getting two [moderately] successful singles released: The Ballad of Jenny Ledge and Last Plane Out.” WK

After the official Toy Matinee group imploded, Gilbert put together a touring group to perform the songs. He and Marc Bonilla did radio interviews and performances, such as this one for KTYD in which they played cover songs and showcased their knack for wittiness and fun.

He also did session work for established pop musicians, including Madonna and Michael Jackson. He also produced Keith Emerson’s album Changing States. Throughout the ‘90s, Gilbert worked as “a producer, film scorer, and session musician.” DN

Tuesday Night Music Club (1992-95): In 1992, Gilbert and producer Bill Bottrell, who’d helmed the Toy Matinee project, assembled a loose collective of musicians dubbed the Tuesday Night Music Club. They gathered weekly at Bottrell’s studio to hang out and make music. Gilbert brought Crow, with whom he’d struck up a relationship, and the gang carved out what would become her multi-platinum selling debut named after the crew. Gilbert had co-writing credit on many of the the song’s albums, including 1995 Grammy Record of the Year All I Wanna Do. “Crow later acrimoniously split with most of the musicians in the collective…[The rest of the TNMC’ers] worked with singer-songwriters Susanna Hoffs and Linda Perry on two more albums.” WK


Sheryl Crow “All I Wanna Do”

Thud/Tribute Work (1994-96): Gilbert worked tirelessly to open his own studio and, in 1995, released a solo album called Thud.

He also contributed songs to tribute albums of some of his favorite progressive rock artists as well – Genesis, Yes, and Gentle Giant. In 1994, Gilbert even performed Genesis’ rock-opera masterpiece The Lamb Lies Down on Broadway with a newly assembled version of Giraffe. Gilbert’s manager, Jon Rubin, “sent a copy of the recording to Tony Banks and Mike Rutherford who were searching for a new Genesis front man to replace Phil Collins.” WK Gilbert was supposedly set “to fly to London to audition for [the] vacated slot as Genesis’ lead singer” DE when tragedy struck.

Kevin’s Death (1996): On May 17, 1996, Rubin found Gilbert dead at his home just outside of Los Angeles. “The coroner listed the cause of death as ‘asphyxia due to partial suspension hanging.’ Friends and MTV more explicitly reported the cause as autoerotic asphyxiation.” MA The Los Angeles County coroners’ office reports four or five such deaths a year.


One can only imagine the possibilities of what Kevin Gilbert could have continued to contribute to the music world. Rubin, who once fronted ’70s pop band the Rubinoos and is now the executor of Gilbert’s estate, says, KG’s “death was tragic, but his life was not a tragedy.” RS As friend Tim Van Den Berg said, “I would like to believe that he is now blessing another world with his beautiful music.” TV

Posthumous Releases (2000-2009): At the time of his death, KG was working on a second solo album, the rock opera The Shaming of the True (which you can listen to here. It “was largely incomplete, but Gilbert’s estate asked Spock’s Beard drummer Nick D’Virgilio to complete it based on the extant tapes and Gilbert’s notes. A live album (composed mostly of songs from Thud), and a compilation of Giraffe material that Gilbert had been working on and an ‘industrial’ album with Gilbert’s latest group, Kaviar have also been released in the years since his death.” WK

The next seven years saw no activity, but three archival projects were released simultaneously in 2009 – the CD/DVD rerelease of Live at the Troubadour, now called Welcome to Joytown: Thud Live at the Troubadour, and the archival collections Nuts and Bolts collecting previously unreleased works from throughout Gilbert’s career. In 2010, Kevin Gilbert’s widely bootlegged 1991 Live at the Roxy was officially released as Toy Matinee Live. Check out all these albums at KevinGilbert.com.

I have said that if I were a musician, Kevin Gilbert best represents the kind of music I would want to make. His lyrics go beyond clichéd love songs and are infused with witticism. His musicianship showcase the tireless hours he spent in the studio perfecting his craft. It was a shame to lose such an astonishing talent at 29. His work, however, lives on and for those uninitiated in his music, I hope this blog leads you down the same musical journey where KG’s music has taken me.

Happy birthday, Neil Young! Born November 12, 1945, in Toronto, Canada, this rock singer/songwriter and guitarist is one of the most recognized classic rockers in history. He first gained notice with Buffalo Springfield and also has worked with Crosby, Stills & Nash over the years. The brunt of his work, however, has been his solo output. In those three configurations, he has amassed ten albums which rank in the top 1000 of all time according to the DMDB.

In June 2011, a list of Neil Young’s top 20 songs of all time was posted on the DMDB Facebook page in response to a Rolling Stone poll. That list has now been expanded to a top 40 list. As always, DMDB lists are determined by creating an aggregate list from multiple other best-of lists and factoring in chart success, sales, airplay, and awards. More than 30 best-of Neil Young lists were factored in.

Resources and Related Links:
Posted by Dave Whitaker at 9:41 PM No comments: Links to this post

Review: “Beguine” refers to a 1930s’ Cuban dance similar to a rumba. The moves, however, are slower and performed slowly and deliberately. Depending on the account one chooses to believe, songwriter Cole Porter experienced it for the first time on a luxury cruise during a stop in Martinique or a Paris dance hall frequented by Martinique imigrants. He adopted the dance’s rhythm for a big production number for Jubilee, a musical comedy which debuted in 1935. SB The show only lasted 169 performances, which reportedly didn’t upset Porter. He was, however, annoyed that people preferred “Beguine” to “Just One of Those Things,” another song from the show. He’d not anticipated “Beguine” being a hit. SB

That’s not surprising. Although “Porter was a musical master and his songs are among the cream of the musical crop,” PS “Begin the Beguine,” didn’t follow conventional hit-making wisdom. Standards typically had thirty-two measures, but “Beguine” stretched to a whopping 108, making it the longest popular song ever written. SB The piece also had a lot of words, “a chord progression that goes through several modes and keys, [and] a vocal span three steps beyond the octave.” MM-151

Xavier Cugat recorded the song and had a #13 hit with it in 1935. However, it was Artie Shaw’s version three years later which became a #1 PM-476 hit and “one of the most popular jazz standards.” SB His recording came about when fans kept asking him to play it. He gave it more of a swing feel and debuted it at the Roseland State Ballroom. According to guitarist Al Avola, “The first time we played it we could just feel the vibrations. We knew it was going to be big.” SB When Shaw was contracted to record a swing version of Rudolf Friml’s “Indian Love Call,” he did so with the stipulation that he record “Beguine” as the B-side. His hunch paid off; the song became one of the largest-selling instrumental recordings by an American band. TY-181

Shaw charted with it again in 1942 and Eddie Heywood and Frank Sinatra followed with charting versions in 1945 and 1946 respectively. PM-476 The song has also been recorded by Sammy Davis Jr., the Andrews Sisters, the Flamingos, and Johnny Mathis. It was included in the 1946 Cole Porter biopic Night and Day. MM-152 In a Billboard Disc Jockey poll, it was rated as the number 5 song of all-time. PM-363

Posted by Dave Whitaker at 11:52 PM No comments: Links to this post