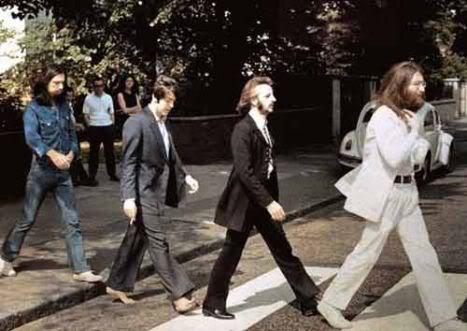 Review: In January of 1969, The Beatles were “exhausted and angry with one another after the disastrous sessions for the aborted Get Back LP,” RS500 a project which resurfaced in the spring of 1970 as the Beatles’ official final album, “the messy, joyless Let It Be.” TL John Lennon and wife Yoko Ono were more interested in promoting themselves as “avant garde peacenik performance artists” JI and the group was feuding over who should control the finances. Even their producer, “the normallly unruffled” George Martin, said “I don’t want to be part of this anymore.” JI

As a result, he was surprised when Paul McCartney asked him to help produce a Beatles’ record “like we used to.” JI “Determined to go out with the same glory with which they had first entranced the world at the start of the decade, the group reconvened at EMI’s Abbey Road Studios.” RS500 “Though the break-up was looming, you'd never know it.” TL Martin said, “It was a very happy record. I guess it was happy because everybody thought it was going to be the last.” RS500 It was: “August 20th marked the last time all four members were together in the studio they had made famous.” RS500

The resulting album was “a collection of superb songs” RS500 which showed the group “still pushing forward in all facets of their art.” AMG Abbey Road echoed “some of the faux-conceptual forms of Sgt. Pepper, but featuring stronger compositions and more rock-oriented ensemble work.” AMG It was “cut with an attention to refined detail;” RS500 indeed, it was the group’s “most polished and crafted long player” TL and “the best sounding Beatles’ record.” JI It made for “a fitting swan song for the group.” AMG

“John Lennon veered from the stormy metal of I Want You (She’s So Heavy) to the exquisite vocal sunrise of Because” RS500 to the “driving funk of Come Together.” TL

“A series of song fragments edited together in suite form dominates side two.” AZ McCartney wanted an entire album of songs which linked together while Lennon pushed for each song to be separate, “preferably with all of his on one side.” JI They compromised with Lennon’s approach for the first side and McCartney’s concept for most of the second. That grab bag on the second side “might only be a bunch of bits and scraps stuck together, but it still sounds fantastic.” TL “Its portentous, touching, official close (Golden Slumbers/ Carry That Weight/ The End) is nicely undercut, in typical Beatles fashion, by…McCartney’s cheeky Her Majesty, which follows.” AZ

“Whether Abbey Road is the Beatles’ best work is debatable, but it’s certainly the most immaculately produced (with the possible exception of Sgt. Pepper) and most tightly constructed.” AMG Also, “Lennon, McCartney and Harrison reputedly sang more three-part harmony here than on any other Beatles album.” RS500 “A worthy last chapter for the greatest band of all.” TL

Posted by Dave Whitaker at 9:31 PM No comments: Links to this post

Gram Parsons has been called “the father of country-rock.” STE Writer Radley Balko argues that “Parsons may be the most influential artist yet to be inducted to either the Rock and Roll Country Music Hall(s) of Fame.” WK He was only 26 when he died on September 19, 1973 from an overdose of morphine and alcohol. However, he left behind an immensely influential body of work with his two solo albums as well as work with the International Submarine Band, the Byrds, and the Flying Burrito Brothers.

The circumstances surrounding his death make for one of rock and roll’s more unusual stories. Before launching his tour in support of his second solo album, Grievous Angel, he went to Joshua Tree National Monument in California. The spot was a frequent getaway and he’d even told his tour manager, Phil Kaufman, that when he died he wanted his ashes spread there. The resulting chain of events maded for an unbelievable and comic story; it was even turned into the 2003 movie Grand Theft Parsons starring Johnny Knoxville.

Parsons’ stepfather intended the body to be shipped from Los Angeles International Airport to New Orleans for a private ceremony. With a borrowed hearse, Kaufman and Michael Martin, a former roadie with the Byrds, stole the body from the airport and headed to Joshua Tree. Once there, they poured five gallons of gasoline into Parsons’ coffin and threw a lit match inside. It made for an enormous fireball, but not a successful cremation. Kaufman and his friend were arrested several days later and fined $750 for stealing the coffin, but there was no law against stealing a dead body. They were also not prosecuted for the 35 pounds of charred remains they left behind in their failed effort. WK

Parsons came from a wealthy but troubled family. He was born in 1946 to “Coon Dog” Connor, a World War II flying ace, and Avis, the daughter of John Snivley who owned about one-third of Florida’s citrus fields. STE Both parents were alcoholics. Two days before Christmas in 1958, Coon Dog committed suicide. WK Avis moved in with her parents in Florida and a year later married Robert Parsons. STE Tragedy struck again when, on the same day Gram graduated from high school, his mom died from alcohol poisoning.

Musically, Parsons was smitten with music at 9 years old after seeing Elvis Presley perform at his school. As a teen, he was a member of several bands. In his solitary semester at Harvard, formed the International Submarine Band. They released an album, Safe at Home, in 1968 but the group was already defunct by its release.

Parsons met Chris Hillman, the bassist of the Byrds, and was brought into the group. He only lasted one album – 1968’s Sweetheart of the Rodeo, but it is considered one of the most important in the development of country-rock.

He then formed the Flying Burrito Brothers with Hillman. They released two albums, 1969’s The Gilded Palace of Sin and 1970’s Burrito Deluxe. During this era, Parsons became close friends with Keith Richards of the Rolling Stones. He also dove deep into substance abuse.

After a failed attempt in 1971 to record his first solo album, Parsons released G.P. in late-1972. A second album, Grievous Angel, was released after his death.

Posted by Dave Whitaker at 12:01 AM 2 comments: Links to this post

Posted by Dave Whitaker at 2:14 AM No comments: Links to this post

Posted by Dave Whitaker at 4:59 PM No comments: Links to this post