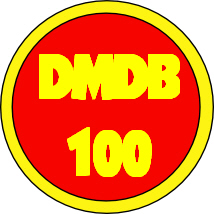 Below are the top 100 acts of all time according to the DMDB. This list is an aggregate of multiple best-of lists, including specialty lists, such as those focused exclusively on a certain genre.

This information is combined with various awards, chart success, and sales figures (click here for a link to the resources). A great effort has been made to find lists that represent numerous genres and eras of music. Even so, this list still leans almost entirely on the 20th century, or roughly the era of recorded music, meaning classical music, such as composers Ludwig van Beethoven, are absent from this list. Still, this list does at least acknowledge that there were big-name acts who made music prior to the rock era, something which few best-of lists seem to realize.

Links below connect to the act’s entry in the Music Makers A-Z guide, which offers a short bio about the act and lists significant works. In some cases, the act has a more detailed DMDB page which can be linked to via the A-Z guide entry. In some cases, an act also has a DMDB list of its top songs, indicated after the act’s name.

Posted by Dave Whitaker at 7:48 PM