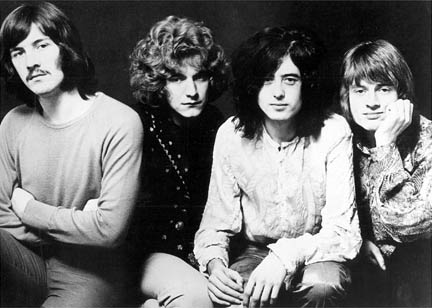 Tracks: (Click for codes to singles charts.) Good Times, Bad Times (3/29/69, #80 US) / Babe, I’m Gonna Leave You / You Shook Me / Dazed and Confused / Your Time Is Gonna Come / Black Mountain Side / Communication Breakdown / I Can’t Quit You Baby / How Many More Times

Review: “Jimmy Page had worked extensively as an in-demand session guitarist all through the Sixties, playing on countless pop and rock recordings, learning about studio techniques and record making as he went along.” AD He finally started to make a name for himself as a guitarist with a group when he became the third (following Eric Clapton and Jeff Beck) legendary guitarist of the Yardbirds. When that group broke up, Page and manager Peter Grant found “themselves with concert dates to fulfill, so set about forming a new Yardbirds line-up. Enter Robert Plant, session bassist John Paul Jones and drummer John Bonham.” AD “Early shows saw the soon to be christened Led Zeppelin billed as The Yardbirds but certain supporters were apparently disappointed that it wasn’t really The Yardbirds.” AD

“When The Who drummer Keith Moon heard about Jimmy Page’s idea for a bluesy hard-rock band, he said he thought it would go over like a lead zeppelin. He couldn’t have been farther from the truth.” RV They “emerged victorious with one of rock’s most thunderous debuts.” RV “Led Zeppelin had a fully formed, distinctive sound from the outset…Taking the heavy, distorted electric blues of Jimi Hendrix, Jeff Beck, and Cream to an extreme, Zeppelin created a majestic, powerful brand of guitar rock constructed around simple, memorable riffs and lumbering rhythms.” AMG Robert Plant with his furious, all out, sexual roar of a voice” AD and “a rhythm section with an almost telepathic understanding” AD left space “to allow Jimmy to fully express himself.” AD

“Good Times Bad Times gets the introductions out of the way…Bonham wails on the kick-drum pedal in the opener with an astounding fury, starting his charge to become the greatest drummer in rock history.” RV “But the key to the group’s attack was subtlety: it wasn’t just an onslaught of guitar noise, it was shaded and textured, filled with alternating dynamics and tempos.” AMG “You can hear each and every instrument clearly and separately from each other instrument. You can clearly make out every drum roll…every nuance of the bass parts.” AD

That song and How Many More Times sport “groovy, bluesy shuffles;” AMG the latter, with “a clear precedent in the Howlin’ Wolf song ‘How Many More Years,’” AD is also a great example of Plant’s “habit of improvising and unwittingly including fragments of blues songs in the lyrics as he went along.” AD

Throughout the album, Zeppelin showcases their capacity at “multi-layered music” AMG with Black Mountain Side, which “was based upon a Bert Jansch tune, but credited here to Jimmy Page,” AD “is pure English folk.” AMG ““Two ‘correct’ writing credits arrive on the album sleeve courtesy of Willie Dixon, as Led Zeppelin produce versions of his You Shook Me and I Can't Quit You Babe.” AD

Those two Dixon covers and Dazed and Confused showcase Led Zep’s talent at “extended psychedelic blues” AMG The latter is “a six minute long scary sounding epic full of astonishing playing and sounds, not least the ‘walking bass’ sound that introduces it. Robert Plant…sets a template for vocalists that followed.” AD

While these “often gather the most attention, the remainder of the album is a better indication of what would come later. Babe I’m Gonna Leave You shifts from folky verses to pummeling choruses.” AMG The song came from “an arrangement Jimmy had been working on back in the final days of The Yardbirds. Perhaps no better single example of the sheer glorious dynamics, the quiet to loud, of Led Zeppelin exists.” AD

Elsewhere “Your Time Is Gonna Come is an anthemic hard rocker” AD while the “two and a half minute riff monster” AD “Communication Breakdown is a frenzied rocker with a nearly punkish attack.” AMG a

Note: the original 1969 review from Rolling Stone makes for an interesting in-the-moment perspective. Critic John Mendelsohn accuses the band of being unoriginal in its British blues-rock blueprint method of forming a band: “add, to an excellent guitarist who, since leaving the Yardbirds and/or Mayall, has become a minor musical deity, a competent rhythm section and pretty soul-belter who can do a good spade imitation.” RS He goes on to say that Led Zeppelin “offers little that its twin, the Jeff Beck Group, didn't say as well or better three months ago.” RS

While Mendelsohn admits that Page is “an extraordinarily proficient blues guitarist and explorer of his instrument's electronic capabilities,” RS he also calls him “a very limited producer and a writer of weak, unimaginative songs.” RS Elsewhere, Mendelsohn rips on “prissy Robert Plant’s howled vocals” RS and attacks Led Zep as being “perfectly willing to make themselves a two- (or, more accurately, one[-and]-a-half) man show” RS that “will have to find a producer (and editor) and some material worthy of their collective attention” RS if they intend to “help fill the void created by the demise of Cream.” RS

While even the album’s supporters may concede that the band’s debut “isn’t as varied as some of their later efforts, it nevertheless marked a significant turning point in the evolution of hard rock and heavy metal.” AMG Even bigger than that is the general consensus that Led Zeppelin “receive the credit for inventing heavy metal” AD and it all started here.