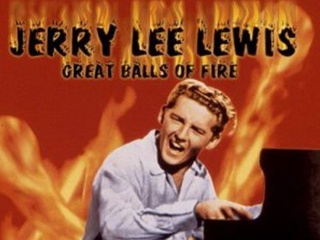 Review: Some of rock ‘n’ roll’s earliest architects walked a fine line between their religious Southern upbringings and the shockingly sexual and aggressive style that defined early rock music. With a musical prowess birthed as much from the black honky-tonks as the Assembly of God Church, CL-114-5 Lewis concocted an uncomfortable blend of music inspired by God and the devil. His “onstage terrorization of the piano” FR-50 earned him the nickname “The Killer.” It also got him booted out of Bible college. CL-114-5

Nowhere was Lewis’ musical dichotomy more on display than with “Great Balls of Fire.” Jerry Lee’s signature song was “full of Southern Baptist hellfire turned into a near-blasphemous ode to pure lust.” RS500 Lewis realized the shock in 1957 of such sexual innuendo coming from a Southern music man SF and initially refused to sing the song. RS500 He and Sun Records’ founder Sam Phillips delved into a theological argument which was eventually swayed Sam’s way by the ever-flowing liquor during the session. RS500

Sam Phillips turned to Otis Blackwell to pen the song as a follow-up to Lewis’ first hit, “Whole Lotta Shakin’ Goin’ On.” Blackwell had a proven track record, having written “the biggest record of the rock ‘n’ roll era” with Elvis Presley’s “Don’t Be Cruel.” CL-114 This poor kid from Brooklyn, New York, was the first black man to really tap into the Nashville sound, dominating the country and rock charts in the mid to late-‘50s. CL-116

As for Blackwell’s writing partner, Jack Hammer, there are contradictory stories. One account says his sole contribution is coming up with the title and selling it to Otis Blackwell, LW-118 while another account says the name is a pseudonym for Blackwell. AMG

Posted by Dave Whitaker at 3:30 PM No comments: Links to this post

Leona Lewis debuted at #1 in the UK with “Bleeding Love”