Carrie Underwood charted with “Before He Cheats”: February 18, 2006

Review: “Done-me-wrong anthems don’t get much more fun or more satisfying” MX than this “clever tale of a jilted girlfriend who gets sweet revenge.” BT The song’s video showed the former American Idol winner making short work of her philandering boyfriend’s truck by way of a Louisville slugger. She made it clear that the next time he cheated, it wouldn’t be on her.

The song helped cement Underwood’s image as a country singer with wide-based pop appeal as well. When “Before He Cheats” won the Grammy for Best Country Song, the songwriters expressed surprise to Billboard magazine about the song’s broad appeal. One of the writers, Josh Kear, said, “You’ve got just enough sex and just enough violence to appeal to both sexes. The fact that they just left it as a straightforward Country record and it worked was a surprise, and pleasantly so.” SF

The other writer, Chris Tompkins relayed to TheBoot.com that they originally envisioned the song being sung by someone with a tougher image, like Gretchen Wilson. SF Underwood confessed to CMT that she almost passed on the song, saying, “People are going to hate me for singing this song. They’re gonna be like, ‘Oh my gosh, we can’t listen to her album. She’s bad and I can’t let my children listen to this.’” SF

The song accomplished several notable achievements. It took 38 weeks, longer than any other song, to climb into the top ten of the Billboard Hot 100. SF Before the end of its run, it had logged 64 weeks on the chart, making it the fifth-longest charting single in Hot 100 history. WK It also became the first country song to sell two million downloads SF and is the fourth best-selling country song of all time. WK The song nabbed plenty of awards including Country Song/Single of the Year from the People’s Choice Awards, the Country Music Association, and ASCAP. CMT and the Academy of Country Music named it Video of the Year. 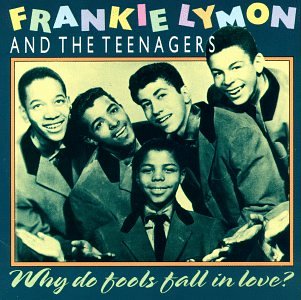 Frankie Lymon & the Teenagers “Why Do Fools Fall in Love?”

Review: Frankie Lymon was “one of rock & roll’s first teen prodigies, [but also] one of its earliest tragedies.” RS500 He was w by 25, a penniless heroin addict. RS500 However, in his brief life, he contributed “Why Do Fools Fall in Love,” which has been called “the perfect combination of commercial pop and doo-wop music.” SJ-166 At thirteen, Lymon became the youngest artist (at that time) to top the U.K. charts. SF He had a voice that had yet to succumb to puberty and the moves and personality which served as a model for future child pop stars like Michael Jackson. FR-66

Richard Barrett, who is called a producer in one source KL-38 and simply a singer for another local doo-wop group in another source SJ-166 is credited with hearing the group and bringing them to label owner George Goldner, KL-38 who also recorded the doo-wop classic “Gee” by the Crows. Herman Santiago was supposed to sing lead, but in more conflicting tales, was either sick that day SJ-166 or was just bumped because Goldner liked Lymon’s delivery better. KL-38

It should come as no surprise that with all the conflicting tales surrounding the song, the writing credits are also a matter of dispute. One account says that Lymon wrote it for his girlfriend, CR-458 but another source has member Jimmy Merchant telling a different tale. He says the group used to perform in the hallway of the building where member Sherman Garnes lived. A tenant named Robert offered the group some love poems from his girlfriend to see if they could make any into songs. SJ-166

“Robert’s girlfriend” does not show up in any writing credits, but a lot of other names do. Early vinyl pressings credited Lymon, Santiago, and Merchant. WK The song was later attributed to Lymon and Goldner, who eventually sold the rights to Morris Levy, a label owner notorious for claiming copyrights on songs he didn’t write. SF A 1992 court battle awarded credit to Santiago and Merchant WK but were returned to Lymon and Levy when, on appeal, a judge agreed that Levy hadn’t written the song, but that the lawsuit had been filed too late. SF Yet another source says a lawsuit awarded Santiago and Garnes with authorship. JA-215 It is, of course, the only incident in the history of recorded music of disputed royalties over a hit song. Ever.

Posted by Dave Whitaker at 9:18 PM No comments: Links to this post