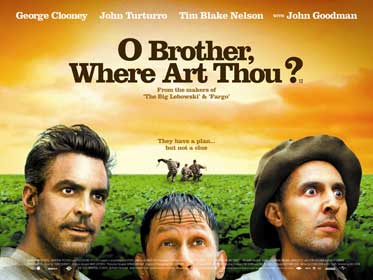 The soundtrack to O Brother, Where Art Thou? was a slow burner. Released in December 2000, it served as the musical back drop to “the Coen brothers’ delightfully warm and weird Depression-era re-telling of Homer’s Odyssey.” AMG The soundtrack hit its peak in the first quarter of 2002 after winning the Grammy for Album of the Year. That sent the album to the top of the charts and completely out-of-the-blue blockbuster status as an eight-million seller in the U.S.


“In order to capture the sound of Mississippi circa 1932, the Coens commissioned T-Bone Burnett, a masterful producer whose work with artists like Elvis Costello, Sam Phillips, Joseph Arthur, and Counting Crows has earned him a special place in the folk-rock hall of fame.” AMG He tapped “an impressive assembly of old-time country veterans (Fairfield Four, Ralph Stanley, the Whites) and talented newcomers (Gillian Welch, Alison Krauss, Emmylou Harris)” AMG to “re-create the country, bluegrass, folk, gospel, and blues of the era.” AMG

“There are no original compositions here (though Burnett is given a ‘music by’ credit usually reserved for composers), and the characters do not generally break into stylized song and dance numbers.” AMG However, “nearly every scene in O Brother is set to a period song, and the music frequently drives and defines the action.” AMG For example, the a cappella performance on Stanley’s “chillingly plaintive O Death” AZ “sets a chilling tone for a climactic struggle at a Ku Klux Klan rally.” AMG Also, “a significant segment of the plot hinges on the (utterly plausible) notion that Dan Tyminksi’s ebullient rendition of I Am a Man of Constant Sorrow could be a runaway hit.” AMG

The material is featured “in arrangements that are either a cappella or feature bare-bones accompaniment.” AZ “Nothing mucks up these homespun tunes” TM “which were made without the meddling clarity of digital technology” AMG but instead in a style “reminiscent of the single-microphone, wax-cylinder recordings of the 1930s.” TM They “give the film much of its power and authenticity.” AMG Every song was recorded for the film with the exception of “a stunning 1955 Alan Lomax recording of a black prison chain gang singing Po Lazarus, and Harry McClintock’s Big Rock Candy Mountain.” AMG

The soundtrack is “chock-full of ol’-timey fun” ZS as “a great throwback to pickin’, grinnin’, fiddling, and knee-slappin’” ZS music, all a testament to “Burnett’s remarkable skills as a producer.” AMG It serves as “a powerful tribute not only to the time-honored but commercially ignored genres of bluegrass and mountain music.” AMG
Awards: Resources and Related Links:
Posted by Dave Whitaker at 12:01 AM No comments: Links to this post