“Walk This Way,” about a high schooler losing his virginity, was sung at a fast speed with emphasis on rhyming. The title was inspired by a line in the Mel Brooks’ movie Young Frankenstein. WK While initially released as the second single for Aeromsith’s 1975 album Toys in the Attic, the song didn’t become a hit until after two singles from fourth album, 1976’s Rocks, charted. Then the late-1976 reissue climbed to #10 in the U.S. and established “Walk This Way” as one of Aerosmith’s signature songs and a staple of classic rock radio. A decade later, Aerosmith had fallen on hard times, unraveled by drug and alcohol problems. An attempted comeback with 1985’s Done with Mirrors did little to regenerate interest. However, a New York-based rap group would revive the song – and Aerosmith’s career.

DJ Jam Master Jay of Run-D.M.C. frequently cut back and forth between two copies of “Walk This Way” to allow MC’s Run and DMC to add rhymes to the instrumental. When the trio started work on their Raising Hell album, producer Rick Rubin – a fan of metal and rock – suggested they remake the song.

The resulting cover is often credited as breaking rap into the mainstream, as it was the first rap song to hit the top 5 of the Billboard Hot 100 chart. WK The song was instrumental not only in introducing rock into rap music, but opened the possibilities for non-rap acts to include the genre in their music.

The song also put Aerosmith back in the spotlight, not just because the band had been covered, but because singer Steven Tyler and guitarist Joe Perry participated in the remake. “Perry acquitted himself quite well, as usual, and Tyler’s snotty snarl prospered in the hip-hop context.” MA The pair also appeared in the classic video which pitted them against Run-D.M.C. as neighbors trying to out-blast each other. By the video’s end, they all perform together on stage.

That album was such a success, it seemed impossible to follow. It spent three weeks atop the Billboard album chart and became one of the world’s all-time best-selling albums.

However, Madonna’s third album, True Blue, proved her most successful studio effort. It spent five weeks on top of the album chart (second only to the 6 weeks for 1989’s Like a Prayer). It also bested Virgin by landing three #1 songs with “Live to Tell”, “Papa Don’t Preach”, and “Open Your Heart”. Two more song – “True Blue” and “La Isla Bonita” – were top 5 hits. According to AlRog at RateYourMusic.com, True Blue is one of only 13 albums to land five top-five hits. 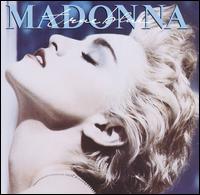 Click to see the DMDB page for ‘True Blue’

Blue also edged Virgin in worldwide sales, although both are in the 26 million range. Only her 1990 compilation, The Immaculate Collection, has more sales at 31.5 million. (See sources for sales figures here).

At All Music Guide, Stephen Thomas Erlewine says that it was with True Blue that “Madonna truly became Madonna the Superstar – the endlessly ambitious, fearlessly provocative entertainer that knew how to outrage, spark debates, get good reviews...and make good music while she’s at it.” STE The album won The Juno Award (Canadian equivalent of the Grammys) for International Album of the Year.

Madonna rates in the top 10 acts of all time according to Dave’s Music Database. She is also a Rock and Roll Hall of Fame inductee.

The DMDB page for the ‘True Blue’ album features this and four other videos from the album.