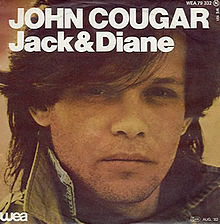 In 1981, John Mellencamp (then known as John Cougar) could only boast of modest chart success, having scored top 40 hits with “I Need a Lover”, “This Time”, and “Ain’t Even Done with the Night”. However, 1982’s American Fool thrust this Indiana heartland rocker into the limelight. The album hit #1 on the strength of the #2 single “Hurts So Good” and the chart-topping “Jack and Diane”.

The latter was a “ballad of an American couple, taking them from courtship through rocky marriage.” JA Mellencamp was inspired to write the nostalgic song after watching the 1961 movie Splendor in the Grass, starring Warren Beatty and Natalie Wood. WK It was a tribute to the rural working class of his hometown of Seymour, Indiana. SF For the video, Mellencamp even used some of his own high school photos and home movies. SF Initially, the song was supposed to be about an interracial couple, but Mellencamp realized it might provoke backlash. WK

The song wasn’t easy to make. As Mellencamp said, “The arrangement’s so weird. Stopping and starting, it’s not very musical.” WK As such, he included hand clapping in the song to help keep the tempo. It was supposed to be removed from the final version, but he realized the song didn’t work without it. WK

Mellencamp told Classic Rock magazine that the song wouldn’t exist if it weren’t for musician Mick Ronson, who’d worked primarily as a guitarist with David Bowie and Ian Hunter. He helped on several cuts for the American Fool album. Mellencamp had discarded “Jack and Diane” until Ronson suggested the baby-rattle-style percussion and the “let it rock, let it roll” chorus. WK