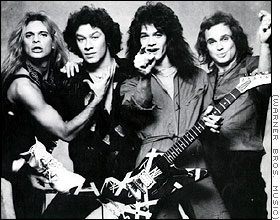 Review: “Van Halen’s self-titled 1978 debut is undoubtedly one of the all-time best debuts by a hard rock/heavy metal band. All of the components for a classic are represented – excellent songs and high-octane performances…are used to create an invigorating, original sound. Like other acclaimed debuts (Led Zeppelin, Are You Experienced?), Van Halen has a raw edge since it was recorded quickly, and every single song is a winner.” AMG

“While singer David Lee Roth’s bravado and the steady rhythm section of drummer Alex Van Halen and bassist Michael Anthony were both key ingredients, the main attraction was Eddie Van Halen’s guitar playing” AMG which “sounds like a cross between an electric guitar and a howitzer.” DV “Few other guitarists have had such an instant impact on a generation of up-and-coming players who copied his unorthodox, kamikaze style – especially…on the album’s legendary solo, Eruption” AMG in which he “revolutionized the guitar community by introducing a technique called finger-tapping into the heavy metal lexicon.” AZ

Runnin’ with the Devil

“Even if you don’t like…Roth’s sex god schtick or …Eddie’s…hyperactive hammering…it’s impossible not to rock out to the California quartet’s debut.” DBW “Van Halen amply demonstrate their drive, showmanship, and musicianship throughout.” AZ “Almost all of the tracks…have rightfully become radio staples.” AMG “step back in awe at the sheer savagery with which the band attacks the opener Runnin’ with the Devil.” DV “Feast on the chiming chord shifts and monstrously fat chorus riffs of Ain’t Talkin’ ‘Bout Love.” DV “Cackle with glee at the sassy lyric and effortless virtuosity of I’m the One.” DV

The band also offers a “driving, thrashing, ecstatic take on the Kinks’ classic You Really Got Me,” DV “probably best of a long line of Van Halen covers.” DBW In a completely different vein, they deliver “the lounge-y Vegas start and blistering hard rock finish of Ice Cream Man.” DV Both covers “remain awe-inspiring to this day.” AMG

You Really Got Me

Part of the album’s success is due to producer Ted Templeman. “The sound is marvelous,” DBW “the hooks are huge,” DBW and “the excitement of their live show was captured perfectly.” AMG He “balances massive guitars with a thundering rhythm section…, light but effective use of studio tricks…, and performances that are precise without being clinical.” DBW

“Van Halen proved to be the ultimate coming-of-age soundtrack to many a teenager since its release.” AMG It is “one of the ultimate party albums over the years, since the overall mood is excited and celebratory.” AMG “Everyone on the planet should own a copy of this landmark release.” AMG “It forever reshaped the landscape of hard rock – not to mention the repertoire of an entire nation of air-guitar players.” DV

Review: The Saturday Night Fever soundtrack sold 25 million copies on the strength of this and three other #1 songs, making it the biggest album of all-time until Michael Jackson’s 1982 Thriller album. B1-478 For better or worse, there are few songs more associated with disco than “Stayin’ Alive.” HT100

It was written after Robert Stigwood, the Bee Gees’ manager, asked the group to create music for a film he was producing that was based on an article in a New York magazine about the club scene in Brooklyn. RS500 Upon hearing the demo of the song, Stigwood wondered why the group wasn’t singing “Saturday Night, Saturday Night.” Maurice Gibb explained that “It’s corny; it’s a terrible title.” BR1-478 “There are so many blood records out there called ‘Saturday Night.’” BR1-478

“Confident, cocky, streetwise and upbeat,” LW-147 the song perfectly complements the movie’s lead character as portrayed by star John Travolta. LW-147 The song was not intended as a single, but after fans saw trailers for the movie, they swamped radio stations and RSO Records with calls for the song. WK

The song was released as the second single, following the group’s blockbuster ballad “How Deep Is Your Love.” The soundtrack also generated number one songs with the Bee Gees’ “Night Fever” and Yvonne Elliman’s “If I Can’t Have You.” The feat gave the brothers Gibb bragging rights to having penned four chart-toppers in six months. However, Barry could boast an even bigger accomplishment. He shared writing credit on all three of younger brother Andy’s #1 songs from July 1977 to July 1978. This gave Barry seven trips to the pinnacle and a total of 29 weeks in the pole position as a writer in a year’s time.

Posted by Dave Whitaker at 10:53 PM No comments: Links to this post