The Rolling Stones released Exile on Main Street: May 12, 1972 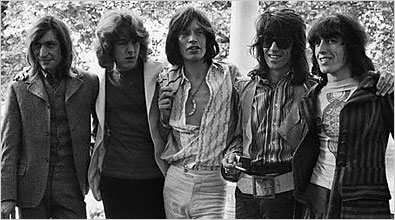 Review: “Few other albums, let alone double albums, have been so rich and masterful as Exile on Main Street.” AMG “Raucous, boozy, weary, violent and sex-obsessed, this double album sounds like the work of heathen outlaws, which of course it was. On the run from Fleet street mobs, narcotics officers and the Inland Revenue, the Stones holed up at Keith Richards’ chateau in the south of France and composed an epic blues that went beyond tribute and beyond blue.” TL

“Greeted with decidedly mixed reviews upon its original release,” AMG this “sprawling, weary double album” AMG “allowed the band to relax a bit.” CD It is now “regarded as the Rolling Stones’ finest album. Part of the reason why the record was initially greeted with hesitant reviews is that it takes a while to assimilate.” AMG They don’t “leap into new worlds so much as master the old ones” AZ1 as they “speed through familiar neighborhoods of country, blues, and R&B.” AZ1 For example, “no longer does their country sound forced or kitschy – it’s lived-in and complex, just like the group’s forays into soul and gospel.” AMG

The songs take “the bleakness that underpinned Let It Bleed and Sticky Fingers to an extreme.” AMG “If the late ‘60s were the Rolling Stones’ road trip through rock’s American roots, then Exile on Main Street was the stop at the highway diner.” CDU Although recorded in Keith Richard’s basement in France, “the album is rich with some of the same rootsy Southern sprit” BN as theSticky Fingers recording sessions in Muscle Shoals, Alabama. “Much of it sounds as if it was recorded live at a gospel revival. In this rich assortment of gospel and blues Mick is by no means out of his element,” CDU but Exile “found the Stones sounding more like Keith Richards’ juke-joint band than ever before.” CDU

Indeed, while “Keith Richards and Mick Taylor [are] spinning off incredible riffs and solos,” AMG “Jagger’s vocals are buried in the mix” AMG leaving him “with something akin to pure singing, utilizing only his uncanny sense of style to carry him home…His performances [prove] that there’s no other vocalist who can touch him, note for garbled note.” RS He “manages to sound intently focused and deeply stoned.” TL

Meanwhile, drummer Charlie Watts “minds the store with impeccable rhythm.” TL He has “room not only to set the pace rhythmically but to also provide the bulk of the drive and magnetism” RS while Bill Wyman, whose “bass has never been recorded with an eye to clarity…fulfills his support role with a grace that is unfailingly admirable.” RS

“In the tradition of Phil Spector, they’ve constructed a wash of sound in which to frame their songs, yet where Spector always aimed to create an impression of space and airiness, the Stones group everything together in one solid mass.” RS

The noise fest kicks off with “the hyper Rocks Off.” AZ1 “Kicked off by one of Richards’ patented guitar scratchings” RS and Jagger’s “swaggering frustration [as he sings] ‘I only get my rocks off while I’m sleeping.” AZ1 This is “a proto-typical Stones’ opener…great choruses and well-judged horn bursts, painlessly running you through the motions.” RS

“Rip This Joint is a stunner, getting down to the business at hand with the kind of music the Rolling Stones were born to play. It starts at a pace that yanks you into its locomotion full tilt, and never lets up from there; the sax solo is the purest of rock and roll.” RS

“Slim Harpo’s Shake Your Hips mounts up as another plus, with a mild boogie tempo and a fine mannered vocal from Jagger. The guitars are the focal point.” RS Later, the band rework Harpo’s “Hip Shake” “into a harp-and-piano steamroller…in Ventilator Blues” AZ1 with Mick “spreading the guts of his voice all over the microphone.” RS “Keith claims [it] was inspired by a grate, while the song plays like an ode to a pistol.” AZ2 Another blues cover, of Stop Breaking Down by Robert Johnson, “shows their undeniable respect for American blues.” CDU

On “the luxurious Tumbling Dice” CDU “the guitar figure slowly falls into Charlie’s inevitable smack [and] the song builds to the kind of majesty the Stones at their best have always provided…Keith’s simple guitar figure providing the nicest of bridges, the chorus touching the upper levels of heaven and spurring on Jagger, set up by an arrangement that is both unique and imaginative. It’s definitely the cut that deserved the single.” RS

That song “and Loving Cup betray their Southern gospel leanings;” CDU as do Sweet Black Angel,’ I Just Want to See His Face, and Shine a Light. “‘Sweet Black Angel,’ with its vaguely West Indian rhythm and Jagger playing Desmond Dekker, comes off as a pleasant experiment that works” RS and on “Face” “Jagger and the chorus sinuously wavering around a grand collection of jungle drums.” RS

“Producer Jimmy Miller valued atmosphere over precision in his recording techniques, so Mick Jagger competes with a wooly sax and a juke joint piano and still his vocals make Sweet Virginia feel…like a bruise that’s fun to touch.” TL It “is a perfectly friendly lazy shuffle that gets hung on an overemphasized ‘shit’ in the chorus.” RS

"Torn and Frayed has trouble getting started, but as it inexorably rolls to its coda the Stones find their flow and relax back, allowing the tune to lovingly expand.” RS Meanwhile “Happy lives up to its title from start to finish. It’s a natural-born single” RS and “the closest thing to a pop number Mick and Keith have written on the album.” RS

“Turd on the Run, even belying its gimmicky title, is a superb little hustler; if Keith can be said to have a showpiece on this album, this is it. Taking off from a jangly ‘Maybellene’ rhythm guitar, he misses not a flick of the wrist, sitting behind the force of the instrumental and shoveling it along.” RS

“Let It Loose…is one beautiful song, both lyrically and melodically. Like on ‘Tumbling Dice,’ everything seems to work as a body here, the gospel chorus providing tension, the leslie’d guitar rounding the mysterious nature of the track, a great performance from Mick and just the right touch of backing instruments. Whoever that voice belongs to hanging off the fade in the end, I’d like to kiss her right now: she’s that lovely.” RS

With “its overall murky adrenaline,” AZ1 Exile “sets a remarkably high standard for all of hard rock” AMG as it “caps the Stones’ great 1968-‘72 run.” AZ2 Indeed, it is “one of the most essential rock records ever created.” BN